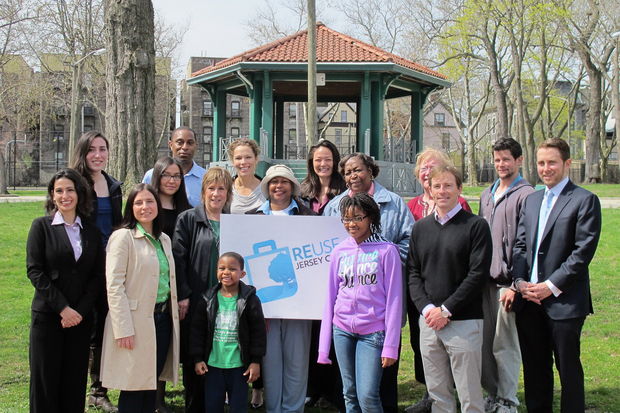 Jersey City celebrated the 44th anniversary of Earth Day with a commitment to rid the city of plastic bags and replace them with sustainable, reusable bags.

ReUse Jersey City, an initiative launched to promote reusable bag use, has the goal of reducing the number of plastic bags throughout the city.

During a press conference to highlight the program today in Arlington Park, Tom Cherry, CEO of MY ECO — one of the campaign’s sponsors — said the city uses an estimated 100 million plastic bags a year, which end up in landfills, on streets and clogging drainage pipes.

“We don’t have a product problem, we think there is a habit problem,” Cherry said. “What we are trying to do is change the behavior of people in communities to get them to move away from disposable bags and towards reusable bags.”

That goal, Cherry said, will be reinforced by something nearly everyone already has: their cell phone.

People are being encouraged to download the MY ECO app, which is supported on iPhone and Android. The app will serve as a reminder for people to take their reusable bags with them to the store, track the number of bags you save and provide a plethora of other metrics.

However, habits are hard to change, Cherry conceded. So the campaign has worked with local retailers to take some of those cost savings they will realize when people are using less plastic and invest them back into the community.

Local retailers will take some of those savings and donate them to local schools and nonprofits, such as the Jersey City Parks Coalition.

In fact, those that download the MY ECO app will be able to select which nonprofit or school in Jersey City will receive the money.

Retailers that have already joined the campaign include the A&P at 125 18th St., and Pathmark locations at 321 Stadium Plaza and 420 Grand St.

Laura Skolar, president of the Jersey City Parks Coalition, said the campaign is a win-win for both the environment, and local schools and nonprofits.

“For the nonprofit, it is really special that we can have donations from this program go directly to our parks,” Skolar said.

Florance Holmes, co-founder of the nonprofit Friends of Arlington Park, said the funds generated by ReUse Jersey City will be a “great help” to organizations such as hers.

“We need whatever we can get for this park,” Holmes said as she looked over the park. “I have such a big dream for this park.”

ReUse Jersey City is sponsored by Goldman Sachs, Bag the Habit and MY ECO.

Chanda Gibson, vice president in corporate services and real estate at Goldman Sach’s, said the campaign brings sustainability both to the environment and charities in the city.

“It’s a beautiful thing when your environmental commitments can meet your social commitments, and this was an initiative that we felt we could support,” said Chanda, a local resident for a dozen years. “It was a way we felt like we could support sustainability and a local school or charity of your choice.”

In addition, The Depository Trust & Clearing Corporation, a sponsor of the campaign, is giving away 1,500 reusable, eco-friendly bags to the community and local schools.

Bag the Habit, a Jersey City business, has also launched a bag design competition for artwork that will appear on the reusable bags. Residents can submit their designs now through May 27 in two categories: general resident and student under 18 years old. Submissions can be sent to www.reusejc.org/design.

The submissions will be whittled down to finalists, before residents then vote for the design of their choice online in June. Two winners — one from each category — will receive a $250 cash prize and have their design printed on the bags.

Holly Tienken, co-founder of Bag the Habit, said the campaign will change the way people in Jersey City think about plastic bags.

“The reusable bag design competition, coupled with the ReUse Jersey City effort to eliminate single-use bags, will get city residents thinking about the importance of ditching plastic and excited about reusable bags,” said Tienken.

ECO Tip of the Day

According to Resource Recycling Magazine Americans throw BILLIONS of dollars into landfills each year. The annual value of non-recycled (disposed) material is as follows:

Paper: Recycling rate of 57% results in $3.1Billion worth of material disposed annually

Aluminum cans: Recycling rate of 55% results in $1.3Billion worth of material disposed annually

Plastic bottles: Recycling rate of 27% for HDPE, 29% for PET results in $1.6Billion worth of material disposed annually

Steel cans: Recycling rate of 65% results in $0.4Billion worth of material disposed annually

Glass bottles: Recycling rate of 28% results in $0.21Billion worth of material disposed annually.

It's time to change!